In a technologically connected world, it’s easy to forget the importance of place: the continuity and memory within land, the trauma of physical separation, and the connection in everyday acts of eating, sleeping, and working in a shared space. I remembered all of these things over the brief weekend in Montgomery, Alabama that I spent with Tega, my fellow VOCCU admin.

Ever since moving to the United States as a toddler, my family and I had always lived in the North: east coast, midwest, west coast, but always the North. That is, until this past year.

Last summer, I moved to Charleston, South Carolina with my husband. I am still adjusting to the feeling of being so close to the history of American slavery in this way. The building that Charleston used as an auction for enslaved people is one mile from my home. When I read historical texts about slavery, I now recognize the names of nearby towns. During long car trips, we pass miles of fields of cotton.

More than that, I see how the legacy of slavery still impacts this city today. I see segregation in our churches, jobs, and gentrifying neighborhoods. My city’s police department undergoes an audit for racial profiling. My loved ones with darker skin than mine tell me stories about their discomfort and fear while driving on our streets and shopping in our grocery stories.

Place holds memories, and place helps us to understand the present.

When we visited the Legacy Museum, I was deeply impacted by EJI’s soil collection work. As part of their Community Remembrance Project, they have collected, carefully memorialized, and displayed hundreds of jars of soil, which has come from sites of lynchings:

I spent many minutes reading the names, cities, and dates on these jars. Three times, I saw the name of the city that is the hometown for many of my relatives by marriage.

In the neighboring National Memorial for Peace and Justice, we passed eight hundred steel monuments, hanging first below, then beside, then tremendously high above our heads: 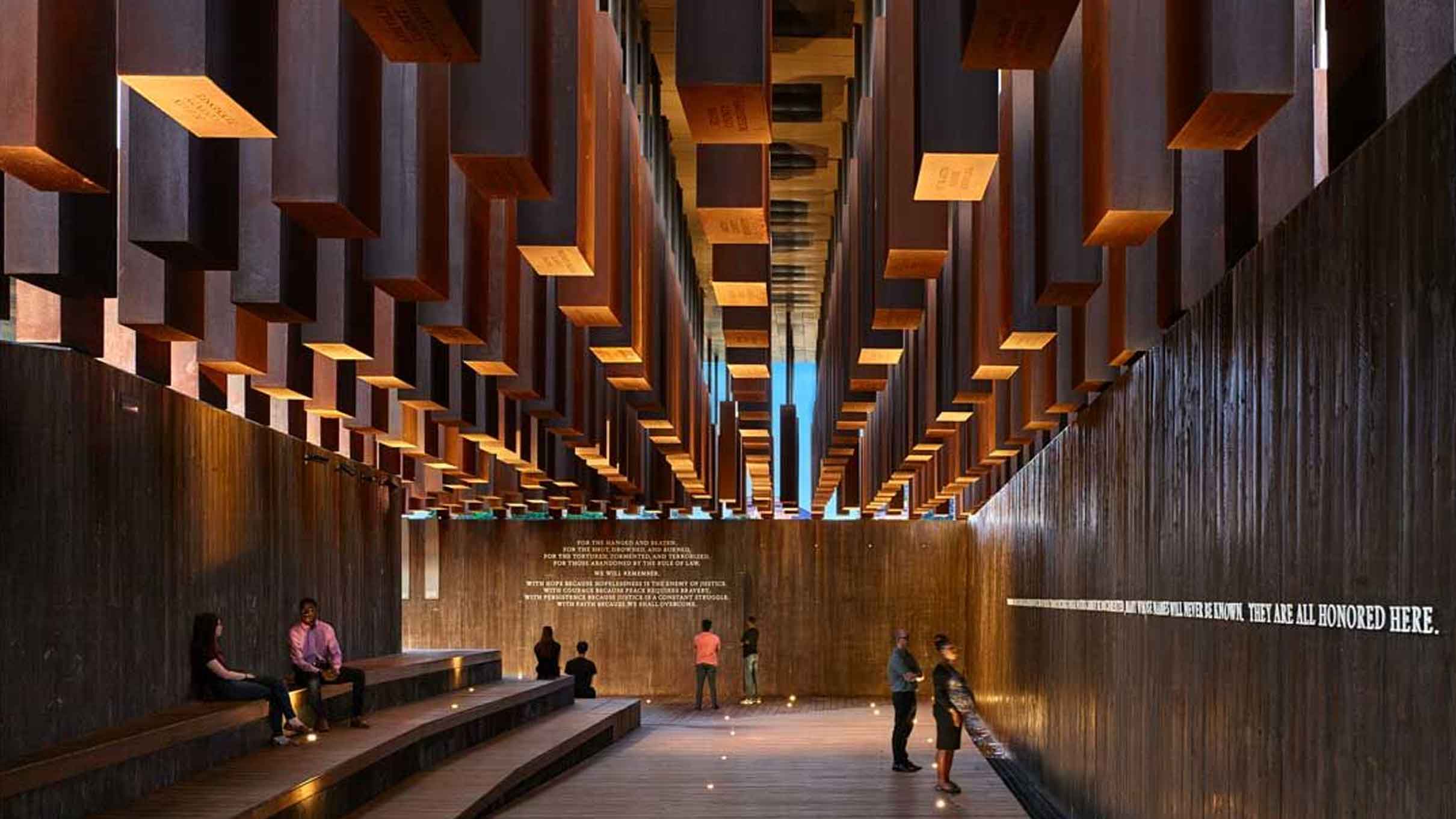 And when we exited, eight hundred identical steel monuments were arranged in rows in the grass. On each monument was the name of a county, and the names of those who were murdered through racial terror lynchings. In the county where I have classes every week, Reuben Hudson Jr. was lynched in 1887, two men whose names were not recorded were lynched in 1892, and Porter Turner was lynched in 1945. In March 2020, my county will publicly memorialize these four black men, after activists in this county’s NAACP visited the EJI museum and memorial.

There are countless things that contribute to our separation from each other as humans, especially those based on systems of oppression and exclusion. At the Legacy Museum, I was terribly struck by the separation caused by the system of mass incarceration.

EJI’s museum documents the historical connection between slavery, lynching, and modern mass incarceration. But hearing statistics are one thing, and hearing stories are quite another.

On the far wall of the museum, a series of letters are hung on the wall. Addressed to Brian Stevenson, a lawyer and the founder of EJI, these letters are from incarcerated people who have been unfairly sentenced and treated with tragic abuse and neglect. Standing there, I was listening to their voices.

In large part because of my social location, both socio-economic and racial, I have no loved ones who are or have been incarcerated. When I hear about the horrors of mass incarceration, it is through books, news articles, and television, not through friends and family. I am both physically and socially separated from those who are in prison.

For Advent this year, I am being guided by Keep Watch with Me: An Advent Reader for Peacemakers as part of my church small group. On my flight to Montgomery, as well as several days after the trip, I was stunned to be reading daily devotions written by people who are living in prison. For what felt like the first time in my life, I was being taught and spiritually shaped by people who were incarcerated. In a country which tells us that incarcerated people’s physical movement must be restricted, their voices must be regulated, and their voting rights must be denied, it is radical to participate in removing those barriers.

When we genuinely strive and struggle alongside one another, pushing for one another’s dignity and equality to be recognized in society, our care will be expressed relationally.

We will not be content to only donate to those in need at a distance, but will be each other’s friends. We will not only talk about minoritized populations in our writing, but will learn from each other over meals. We will care not only about major headlines or dramatic interventions, but our everyday joys and sorrows.

During our admin retreat, Tega and I took the time to connect relationally with one another, but also with the residents of Montgomery. I was truly in the presence of Rev. Tega Swann over the weekend, and she showed genuine pastoral love to every person we met.

We learned about the doctoral work and beloved children of our rideshare driver. We spoke with a woman who had fled her country due to threats to her life, and whose experience as an immigrant in the U.S. had been very difficult so far. We heard about how a man’s faith commitment impacted the way he carried out his job every day.

As an introvert, it usually takes me more time to connect with the people with whom I share a city, building, or even room. My heart was greatly opened by hearing the voices of so many new people.

I am grateful that the stories, legacies, and embodied patterns throughout history which dominant culture has tried to hide, EJI is showing us how to unbury.

“True peace is not merely the absence of tension; it is the presence of justice.” – Martin Luther King Jr., from the National Memorial for Peace and Justice
-Haley Gabrielle

Haley Gabrielle is a Ph.D. student in Religion, with a focus on the New Testament at Emory University. She earned her Master of Arts in Religion, concentrating in Women’s, Gender, and Sexuality Studies, at Yale Divinity School in 2018. Haley is a non-denominational charismatic Christian who currently attends a United Methodist church.

ANNOUNCEMENT: As of JUNE 14, 2019, our platform is no longer a chapter of nor affiliated with Christians For Biblical Equality, Intl. (CBE). We are now an independent group, called Voices of Color: Christians United (VOCCU). Our mission is to center the voices of people of color, especially women of color, in order to expose and combat global injustices at the intersection of gender and race. We stand for the full inclusion of all of God’s children in the life of the Church and in society, regardless of ethnicity, gender, sexual orientation, class, age, or ability. We are excited to launch this new platform and thankful to those who choose to embark on this journey with us. Please bear with us during the transition process of changing our name and logo across all our platforms. Thank you! View all posts by Voices of Color - Christians United (VOCCU)