I was born  in France and experienced racism almost my entire life!

I grew up with an inherited stigma from society, because although we can hide things about ourselves, the color of our (my) skin cannot be hidden, neither does it go unnoticed. No amount of cleansing cream can erase the visibility of my black skin!

As a result of the color of my skin, I was often subjected to comments like “Go back home!” even though my home was France!

Between the jokes about my hair, the ridiculous nicknames , the mockery about my skin, I quickly realized at an early age, that my skin color was my handicap or my weakness in the society into which I was born. How then, could a Black woman love herself in such a context???

I often felt I was born on the wrong side of the world  and sometimes asked myself  why God created me as woman, even more as Black woman?

My Law School had very few people of color because of the highly selective process for admitting the so-called visible minorities. My University was known for welcoming the sons and daughters of rich Caucasians and lawyers, and very few immigrants could successfully apply to and graduate from the university.

One of my fondest memories is that of the ripple caused by my arrival in the university amphitheater…it was as though the entire amphitheater stopped breathing just to watch me walk in the matriculating ranks. One could almost hear the flapping of butterfly wings in the air!

Can you picture six hundred pairs of eyes on you just because you are Black???

Although hugely embarrassed by the stares, I knew that I had the choice of either hanging my head low and hiding my face or walking straight with my head proudly raised. Despite the discomfort of feeling like a bug under a microscope, I chose to walk with my head held high!

The faces of the onlookers betrayed their thoughts: “What could a Black woman accomplish here? How did she qualify to be in these ranks?”

Despite their bemused and querying gazes, none approached me to try to know me better or try to strike a friendship or relationship with me. This was the same for other people of color. Visible minorities functioned together. We ate together, worked together and went out together. Our dating life also suffered greatly, because visible minorities could rarely secure a date as the population was mostly Caucasian and ne’er would the twain mix!

During the period of my study, I did not yet know the LORD and it was only about a decade later that I met Jesus.

At that point, I honestly did not think that the Lord was concerned with racism, feminism, and or equal rights. So I lived my faith like many Christians – without really asking myself how the Christian conceptualization of God as ‘White and man’ could influence my relationship with Him.

Everything changed when I had my first son and experienced a maternal burnout…I was unprepared to be a mother, and the magnitude of the God-given task of parenting first settled on me when I held my son in my arms for the first time.

It was then that I turned to the ‘classical God’ who had always been preached to me and asked Him how my woman’s concerns could affect Him…How could a God who is always seen as Father understand me, a mother? How would the few female images of Him scattered here and there in the Bible support me in my motherhood?

God’s response was not long in coming, as He presented Himself to me as Godde Rouah Hakodesh (Holy Spirit) and subsequent research on the feminine attributes of God completely changed my relationship with Godde!

Indeed, girls tend to build their femininity by referring to their mother or some other maternal figure. So, as Godde’s daughter, I also had this intense need to identify with God as a Mother, because not only is it already very difficult for a girl to build an identity without female references, but it is even more difficult for a spiritually-minded woman.

Therefore, to meet Godde in the feminine fulfilled my need for identification and at last, I had a spiritual mirror into which I could look and observe myself!

I understood better my femininity as well as my motherhood. I was less stunned by the responsibilities I had to assume because I had a role model. Meeting Godde also completely revolutionized my way of looking at me and gave me an assurance that I did not have before! In reality, Godde is both Father and a Mother!

While my encounter with Godde was a big step towards liberation, it was nevertheless, only the beginning. I grew in the understanding of the Divine Feminine who lay in me like a bottomless pit!  I began to grasp the full extent of what Psalm 82: 6 meant when it said “I said thou are god(-des).” Wow! What an amazing discovery!

Godde the Holy Spirit chose me, a Black Woman and calls me the temple of Godde!

Was there ever a more wonderful reason to love myself and share this incredible good news with another Black woman who suffers from poor self esteem?

Certainly, Godde looks at my skin color and my hair that defies the law of gravity, to settle in me and use all of me to represent the image of Godde on earth!

Godde needs my body, my skin, my hair, my personal history, my emotions so that one can understand how Godde acts and thinks. Godde chooses to live inside me and in my whole being.

Godde dwells in the skin of a Black Woman with frizzy hair and that’s why I am a Black godde! 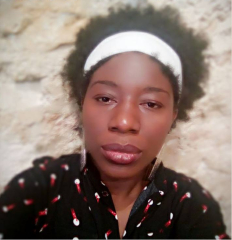 Giylah Canaan is 37, married and the mother of two wonderful boys, aged 4 and 17 months. She’s a writer, a teacher and the founder of the Facebook group, Woman: image of the Holy Spirit/ La femme: image du Saint Esprit . She is also the founder of a leadership training school for women, Training 21:12, School of the Mother Rouah Hakodesh, where she teaches women about different subjects such as motherhood, maternity, marriage, and self-value.

She firmly believes that God is a Father AND a Mother and that realization of the feminine identity of God will greatly impact the church’s perception of the place of women in society as a whole. She is very strongly committed to the intrinsic equality between woman and man within the Church and as a Black woman, she feels the need to be all the more involved in the gender equality conversation because she represents what society considers a double ‘weakness’, i.e., woman and Black. She feels that her duty is to raise her voice and tell society, the Church, and Christians everywhere that the Black woman is also the image of God(de)!