If I were to describe my experience in the Church from the time I experienced and answered my call until not too long ago, I’d use one word ‘lonely.’ And that loneliness had nothing to do with the fact that I was an introvert. It had more to do with being rejected, cast aside and marginalized by those who saw me as ‘different’ and out of place, i.e, Black – more like African (yes, I’ve learned there’s a difference), single- divorced, single mom, from the shores of Africa did not have a place among the ‘chosen’ i.e., men (White & Black).

My loneliness developed due to the absence of colleagues (men & women) who were willing to accept me as a colleague…you see, because God doesn’t ‘choose’ people like me.

There was no one to pray with; no one to cry to; no one to ‘reason together’ with. I wandered around like a lost soul, searching for where I belonged. A place where the people were like me and their faces were like mine.

I watched as my male colleagues banded together and left me out, even when I was physically there with them. Watched as my invitations to partner were ignored. Watched as my presence was ignored. And the more I watched, the lonelier I became, because there was no one like me at the table.

Representation matters. People need to look up and see others like them at the table. People who can understand and relate to them.

When we have such representation, we don’t look so strange to others and we don’t feel estranged either. But for many years, I had no one in whose face I could look and see myself, and there was no one those I sat with could look in their faces and see me and my experiences reflected there. That is until I met one special woman, who like the Samaritan woman, effected introductions between me and her people. It was only then, I found representation – people who looked like me and who represented me.

When I looked into their faces, I could see me: beloved, precious, called, intelligent, lovable, accepted, a human….

And because I could see ‘me’ and they could too, there was space for me at the table. My voice was no longer lost, but heard. My body was no longer ugly, bypassed, invisible and resented, but beautiful, seen, welcomed and accepted. I had space. I mattered. I belong. And all because there were people like me at the table.

I think this is somewhat similar to what Adam experienced at the beginning of creation. Something similar to why God created Eve.

God looked around in creation and on Adam’s behalf, felt the loss, the longing, loneliness that the lack of representation in another brought for Adam, and He decided to fix it by bringing Eve into the picture.

When Adam met Eve, he saw himself reflected in her: he belonged, he was accepted, he was intelligent, he mattered, he looked good! And just like me he decided to make a home on the table of earth with Eve because in Eve, he saw himself. Finally, he could be seen, represented, heard and understood!

Representation matters and it matters in ways that transcend ‘sameness.’ Rather it is more about equality and equity…Whose face do I look in to see my worth, my essence, my value, my purpose? Where do I go to be heard, listened to and understood? Where do I go to rest my aching head and they’d understand enough to give me a pillow to lay that head on rather than turn me away?

For humans, God decided it would be men and women. Together, they’d see and reaffirm each other’s equal worthiness, they’d hear one another, understand one another and belong to one another as those who belong to Him.

He decided men and women would look at each other and see themselves in each other and because of this, they would stand together, side by side, as one in the earth He’d made their home.

Below is a picture of me and my people.

I am no longer lonely nor alone. I finally found a place where the faces are like mine…beloved, accepted, called, redeemed, capable, understood, purposeful.

Take a look at me and my people. Don’t we look alike in worth, essence, and belonging?

This is what God wanted when He created Adam and Eve. Sure they have differences, but they (men and women) are inherently (in worth, essence, value and belonging) the same in God and to God.

This is what my soul sought and hankered after for so many years, wandering alone in different gardens and communities, until He brought me and mine together. Now, we too, say to one another: “You are bone of my bones and flesh of my flesh, and we shall stay together and together be known as the family of God!” 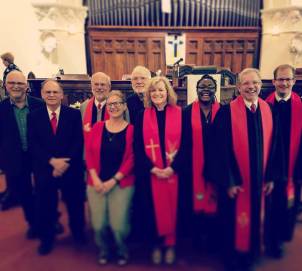 “Can you see how we all look alike, in joy, favor, peace and most of all, belonging? This is what it means to see a face like mine!” -Rev. Tega Swann

Rev. Tega Swann is an ordained Teaching Elder (Pastor) in the Beaver-Butler Presbytery of the Presbyterian Church(USA). She is the founding pastor of Refreshing Springs Ministry, Aliquippa & Ambridge. She has the honor and privilege to be mother to one wonderful child.