Two of my favorite passages in Scripture are the story of the Good Samaritan and Hagar because they demonstrate how God wants us to handle the issues of social differences and racial inequality.

Hagar’s plight is one of a woman who was used and abused by her mistress and master and then cast out and left to die in the desert with her child. As a single mom who’s been through divorce, loss of income and abandonment, I know what it’s like to be with child and not know how you would make it to the next day, week, or month. Yes, I could certainly relate to Hagar: an abused foreigner who is long ways away from her own people and who is alone in the desert with a baby…

Then something happened: the angel of God visited her in the desert; gave her words of hope; promised to care for her and her child; effected a successful return that granted her access to the provisions of her master and mistress’s household; and gave her son an inheritance from the same household that previously sought to erase the proof of his existence!

Hagar’s encounter resulted in one of the many ‘firsts’ in the Bible: she ‘named’ God and gave Him a name that bore witness to her encounter with God – “…the God who sees me…”  Hagar classified this most marvelous encounter with God as simply being seen – what made the lasting impression on Hagar was that ‘she was seen by God.’

The second passage, the parable of the Good Samaritan tells the all too familiar Bible story of the man who was attacked, beaten and robbed and left for dead by robbers on the side of the road. Jesus speaks of a priest and a Levite passing by this wounded, abandoned man, but neither stopping, nor coming to his aid in anyway. Then along came a Samaritan, someone from the hated race. This Samaritan, Jesus says, stopped, administered first aid and then took this man to the closest inn, asked for and paid for his healthcare and services until he was fully restored to health. Not knowing when that would be and because he had to continue his journey, he directed the innkeeper to continue to care for the wounded man and apply his expenses to his personal tab.

Obviously, this Samaritan was a man of influence, means, integrity and character, as were possibly, the priest and Levite also. And it was based on his personal honor that this victim of robbers would receive care that would undoubtedly equal what the Samaritan expected to receive in the same situation.

Jesus asked a question of the crowd listening to his parable of the Good Samaritan, “which one of these three men who walked by, do you think was the wounded man’s neighbor?’ and the crown replied “the Samaritan.”

Today, piggying back from Hagar’s experience, I’d like to ask a different question:

Which one of these three passers-by do you think saw the wounded man?

From Hagar’s and the Good Samaritan’s stories, I’ve realized that to be seen is to be validated, affirmed and restored to dignity and worthiness. This is what God did for a slavewoman who was violated, abused and rejected for dead by her slaveowners, and this was what the Good Samaritan did for the wounded Jewish traveler.

The opposite of being seen, is being passed over as can be deduced from Abraham and Sarah’s treatment of Hagar (they passed Hagar and her son over as inconsequential). No wonder Hagar marveled that the God of the universe ‘saw’ her! If the God of the universe saw her, then it meant she mattered! Such a validation made a great impression on a slave girl whose life and the life of her offspring held no value for her oppressors. No wonder Hagar wanted to memorialize and no doubt, serve the God who saw and validated her worth.

The opposite of being seen is also being passed by as was evident in the actions of the priest and Levite who ignored the roadside victim. They passed by the wounded man as though he did not exist and as though his life had no value. From their actions, one could not elicit that they had passed by a human being, much more, a distressed human being.

But the Samaritan’s encounter was different: if one were watching from afar and couldn’t see the wounded man, one would still be able to deduce that this man – the Samaritan, unlike the priest and Levite – ‘saw’ something. Something that made him stop, get off his donkey,  and come for a closer look and do some things. One would also deduce that that something which he saw, had some value, because he treated it tenderly and took it along with him.

On getting to the inn, if one were the innkeeper and one had no knowledge of the relationship between the victim and the Samaritan, one would not be wrong in assuming the victim ‘meant something’ to the Samaritan.

In both the case of Hagar and the case of the wounded man, we see that their being seen led to affirmation of their worth and subsequent sharing in dignity and economic resources, effectively restoring them to their rightful place as equal image-bearers in society.

This concept of being seen is what I now realize is missing in the inequality dynamics. Thus, the successful passing by people/women of color in many places and spaces of oppression and victimization leads to the continued impoverishment, death and near-death experiences and marginalization of people/women of color.

Women/people of color are passed by daily even as the world sees they are victims of systems that abuses, rejects and abandons them to die.

Women/people of color are passed by daily as the so-called religious folks and authorities ignore their plight and obvious distress and inflicted injustices to continue, uninterruptedly to their more important matters of designated spaces in society which exclude women/people of color.

All too often, women/people of color, although adequate, are passed over and passed by for how they look in the various positions which gender and racial inequality has thrown them. Our religious leaders and organizations walk by: without stopping or giving us a second thought. No one watching them or encountering them would know they had encountered us in our spaces of oppression. They continue uninterruptedly to their lives and positions of being seen with honor and dignity and by so doing, leave a stream of beaten down lives of women/people of color in their wake.

But…once in a while, along comes someone one would never associate with women/people of color; someone whose eyes see our value; someone whose heart draws near to us; someone whose hands pick us up from the spaces we’ve been relegated to die in; someone who expends their resources to set us on our feet; someone who ensures those in their communities treat us with the same dignity accorded them.

Four years ago, one such Samaritan woman saw me and took me to the inn of her presbytery where she made arrangements for me to be treated with the same dignity accorded her. With her own honor and merit, she made space for me. I call her my Lady Barnabas…Since being seen by her and her insistence that I be equally seen by others, many marvelous things have been occurring in my life.

As a result of her loving ministration, support, and advocacy, after many years of being passed by and presumed for dead both as an individual and as woman of color clergy, I was now seen, affirmed, and restored to equal worth and dignity in many spaces, and two years ago, I went from being ignored and dismissed as being worthless and inconsequential to receiving support and recognition for my work which led to me being awarded the Outstanding Women in Ministry, Church Planter award by the International Association of Women Ministers, Western Pennsylvania Chapter.

Since her seeing me, many other Samaritans have also encountered and seen me, and two weekends ago, a group of men and women Samaritans who have become skilled in seeing women of all tribes and nations saw me and slated me as the honored guest speaker  of an event to encourage women to see other women…

For me, being seen as a woman of color means I am not judged and abandoned because of the spaces societal ills have relegated me, but that my worthiness is recognized and affirmed; that mutual dignity is ascribed to me and that I am allowed to equally occupy spaces of influence from which I participate in the flourishing of humanity.

For me, to not be seen as a woman of color means I am robbed and deprived of using my gifts, skills, education, experience, talents, and contributions for the flourishing of mankind, that my voice is silenced while others use my ideas and contributions without my permission and without ascribing me recognition for them, further ensuring that I am left for dead on the world’s roadside as one who is useless and worthless to society. Furthermore, I am judged and condemned for the effects of not being seen!

Mutuality is about being ‘seen’ and ‘affirmed’ as inherently worthy and equally equipped and imbued by God with knowledge, integrity, honor, skills, worthiness, etc., and being ‘brought into’ the space where one exists and functions with others in that paradigm of equality.

Too many organizations and people (religious and secular) have become adept at not seeing people/women of color as being equally worthy in society. But such places and people, despite leaving fellow humans for dead, and despite ignoring and minimizing the plight of people/women of color, hurry along to assert and claim their own places as the pillars of society who are also authorities from God.

Thankfully, God has not left the world without hope. Thankfully, there are many, who despite the divide that sin has erected among us, cross that divide daily to affirm the humanity and worthiness of their fellow people/women of color.

And so I give thanks to all such folks wherever you are. Please continue your work of seeing all those fellow humans whom the world abuses and robs of their dignity and worth as fellow image bearers of the Most High God. The LORD also sees you! Thank you! God bless you!

Today, rather than my bio, I feature some of the Good Samaritans in my life: those who stopped and interrupted their journeys, emptied their purses and expended their resources on my behalf, invited me into their places of honor, and insisted that I be treated with the same dignity and honor as they. 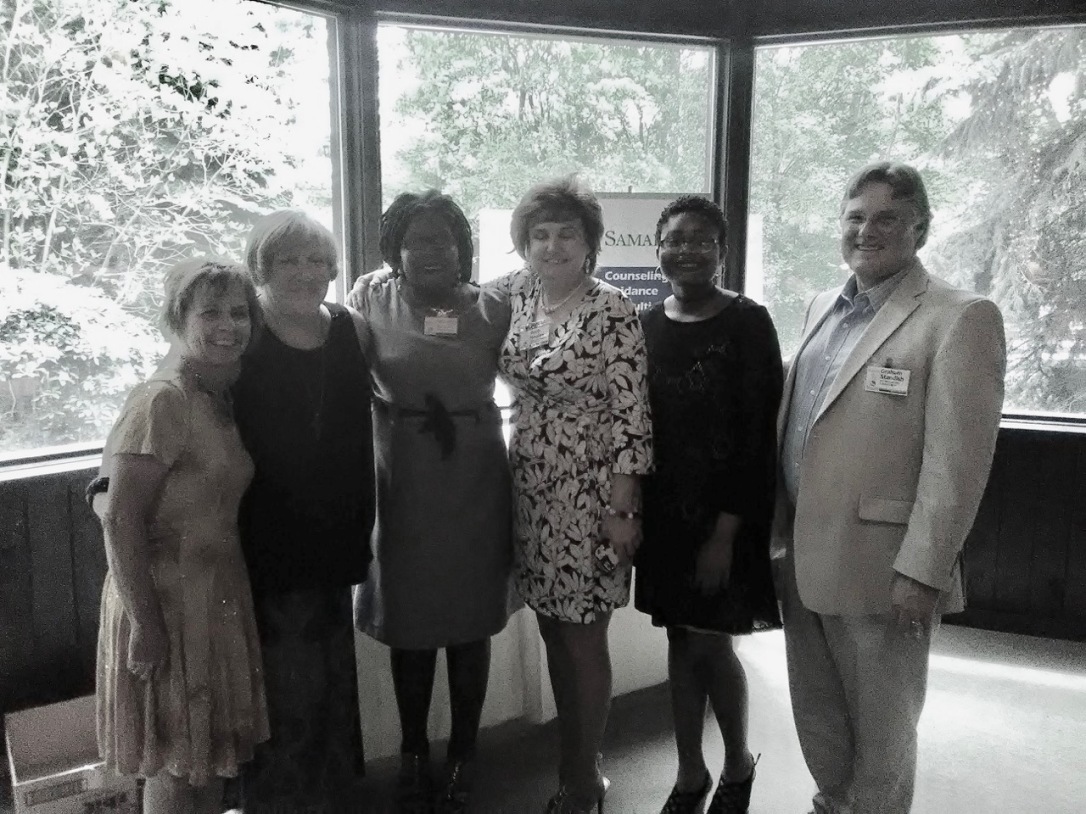